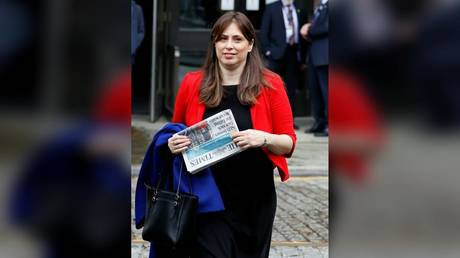 The British government has slammed the actions of dozens of protesters who gathered outside the London School of Economics and heckled Israel’s ambassador to the UK, Tzipi Hotovely, who’d attended a debate at the institution.

On Tuesday evening, Hotovely was accosted by a crowd of apparently pro-Palestine protesters as she left the London School of Economics (LSE), with some shouting “aren’t you ashamed!” as the ambassador was ushered into a car by bodyguards.

Hotovely later posted on Twitter that she would “not be intimidated” and vowed to continue sharing “the Israeli story and hold open dialogue with all parts of British society.” She also thanked the UK government for its support.

Foreign Office minister James Cleverly subsequently blasted what he dubbed the “aggressive and threatening behaviour” of the protesters in a Twitter post, labelling it “unacceptable.”

Home Secretary Priti Patel said she was “disgusted” by the treatment of the ambassador and backed the police in investigating the incident. “Antisemitism has no place in our universities or our country,” she added.

According to the Israeli embassy, the question-and-answer event at the LSE was peaceful and lasted around 90 minutes. Hotovely left the event after the debate had wrapped up, and there were no interruptions during the debate.