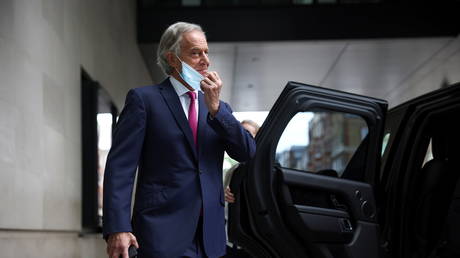 Former UK Prime Minister Tony Blair has said he was “a little too undiplomatic” when he described Britain’s unvaccinated as “idiots” who put unnecessary strain on the NHS with their “irresponsible” decision not to get vaccinated.

Speaking to BBC Radio 4’s PM program on Wednesday evening, Blair reiterated his foreboding about the impact of Omicron on the National Health Service, but appeared to retract an earlier incendiary comment about Britain’s unvaxxed.

“Possibly I was a little too undiplomatic in my use of language,” Blair stated when asked about remarks from earlier in the day, in which he had labeled anti-vaxxers as “idiots.”

The former PM had caused a stir in an interview with Times Radio on Wednesday morning, coming down hard on those who are yet to get their vaccine in the UK.

“Frankly, if you’re not vaccinated at the moment and you’re eligible and you’ve got no health reason for not being vaccinated, you’re not just irresponsible, I mean you’re an idiot,” Blair told Times Radio.

“I’m sorry, I mean that is, truthfully you are. Because this Omicron variant is so contagious, if you’re unvaccinated and you’re in circulation, you’re going to get it. And that is going to put a lot of strain on the health service,” the New Labour leader stated.

Blair said that Omicron, despite some evidence to suggest it is less virulent, could overwhelm the healthcare system, as it is vastly more contagious than previous variants.

Britain recorded more than 100,000 Covid-19 infections on Wednesday. Despite a successful booster campaign, some six million people haven’t been inoculated against Covid-19. This approximately 10% of the UK population makes up 43% of hospital admissions, and Health Minister Sajid Javid has said that nine of out 10 patients needing the most care against Covid-19 were unvaccinated.