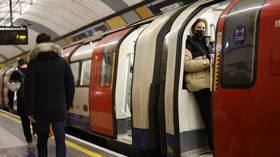 London Underground is facing the longest strike in the rail service’s history, with the train drivers’ union planning staff walkouts every weekend until summer 2022.

In a statement, the National Union of Rail, Maritime and Transport Workers (RMT) announced the intended action, saying its members remain unhappy over night-shift arrangements that they feel are not family-friendly.

“Tube union RMT today confirmed strike action every weekend on the Night Tube from the start of the new year through to June in an ongoing fight to prevent the ripping up of staffing arrangements that would wreck the work-life balance of drivers,” the statement read.


RMT has 83,000 members from more than 150 transport sector companies in the UK.
The action will be staged by RMT members working on the Central and Victoria Lines on Friday and Saturday nights, starting from January 7, from 8.30pm to 8am the next day.

“The union has made it clear that the mandate extends to other lines and will consider broadening the action if LU fails to respond,” RMT said.

“RMT has repeatedly put forward cost-neutral proposals that would repair the damage unleashed by deleting 200 driver posts and which would dig LU out of this mess. They have ignored us and that approach will have severe consequences for Londoners in the new year,” RMT General Secretary Mick Lynch said.

TFL has yet to respond to the announcement. Previously, it said that Tube drivers had received new rosters back in August and that the provisions included a number of assurances for staff, including guarantees that there would be no job losses. In regard to the key issue, the company said that Tube drivers would have to work just four nights a year and therefore the strike actions have been “unnecessary.”