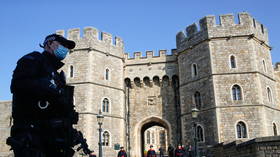 British media has published a photo of the teen who allegedly threatened to kill the queen, as UK authorities plan to review crossbow ownership rules

The first photo of a UK teen who had been arrested at the Windsor Castle premises with a crossbow on Christmas Day has been published by the Sun tabloid. The suspect was earlier identified by the media as Jaswant Singh Chail, 19.

An armed officer apprehended the teen at castle grounds on Christmas Day, some 500 meters away from the apartments of Queen Elizabeth II. She was reportedly inside at that moment, having breakfast. Chail, who had been allegedly armed with a crossbow, used a rope ladder to breach the spiked fence surrounding the heavily guarded royal residence.

The arrest happened 24 minutes after a video was uploaded on snapchat of a man threatening to assassinate Queen Elizabeth. Dressed in black, holding a crossbow in his hands and speaking in a distorted voice, he claimed that the act was going to be revenge for the Jallianwala Bagh Massacre of 1919 that saw the colonial troops killing 379 protesters and wounding around 1,200 others in British India’s Punjab state.

The person in the footage also said that he was an Indian Sikh, whose name “was” Jaswant Singh Chail, but he had it changed to “Darth Jones” – a reference to ‘Star War’ franchise villain Darth Vader.

The Met police said the suspect was detained under the Mental Health Act and that they were investigating the possible connection between the video and the Windsor castle intrusion.

Chail’s father talked to The Daily Mail on Monday, saying that “something’s gone horribly wrong with our son” and that he needed help. So far, all of the family’s attempts to reach out to Chail have been in vain, he added.

In the wake of the incident, British Home Secretary Priti Patel has ordered a review of the current rules regulating the ownership of crossbows in the country.

“We are considering options to strengthen controls on crossbows… and we keep all relevant laws under review to maintain public safety,” a Home Office spokesperson said on Tuesday.

The officials have been told to “incorporate any lessons” from the Windsor Castle intrusion into the ongoing review of crossbow legislation, the government sources told The Daily Telegraph.

According to current UK laws, crossbows are forbidden for those under 18, but they aren’t considered an offensive weapon and may legally be carried in a public place. The police also hold no records of their owners.