The chances of Australia experiencing the soaking wet La Niña weather phenomenon again this summer have tripled, but at least this coming weekend should bring some sunshine.

Experts at the Bureau of Meteorology issued a La Niña alert from November onwards, most likely meaning heavier than usual rainfall for Australia’s eastern states throughout spring and summer.

While the east coast will continue to cop a drenching mid-week, with storms occurring, the weather should brighten in Brisbane, Sydney, Melbourne and Canberra during the weekend. 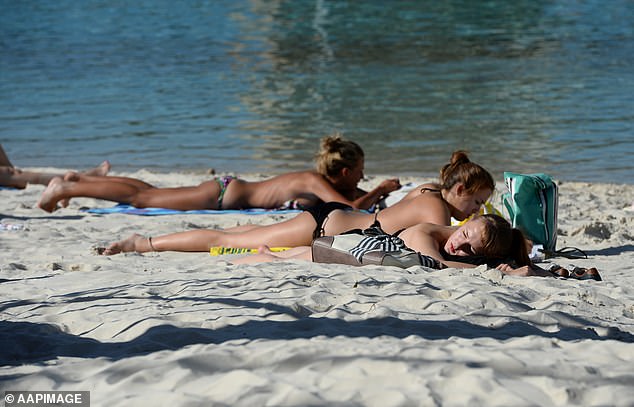 Brisbane will see the best weather on Australia’s east coast this week, with a sunny weekend and temperatures reaching 30. But forecasters warn wet La Niña conditions could be just around the corner (pictured, beachgoers on the Gold Coast) 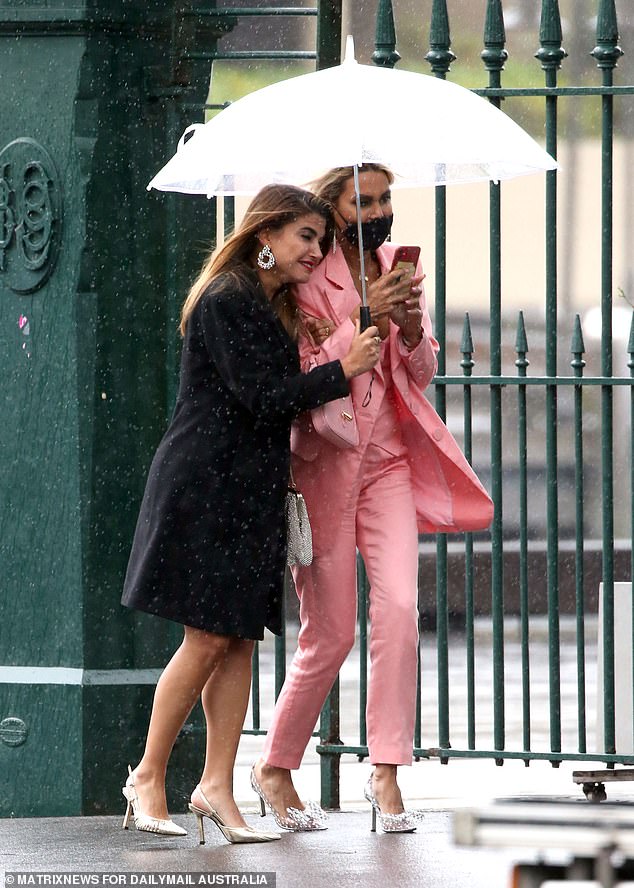 Sydney’s wettest day this week will be Thursday, particularly in the afternoon, with the chance of a severe thunderstorm. But the NSW capital could see sunshine both Saturday and Sunday (pictured, Sydneysiders brace the rain for a night out on Monday)

Brisbane is likely to cop a soaking on Thursday and Friday but recover in time for a weekend of sunshine and warm temperatures both days.

Sunday should reach 30C in the Queensland capital.

Sydney’s wettest day this week will be Thursday, particularly in the afternoon, with a strong chance of a severe thunderstorm.

There should be sunny periods both days at the weekend with temperatures in the mid-to-low 20s. 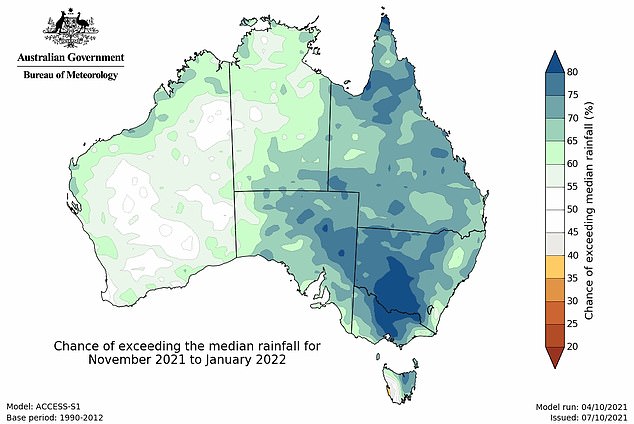 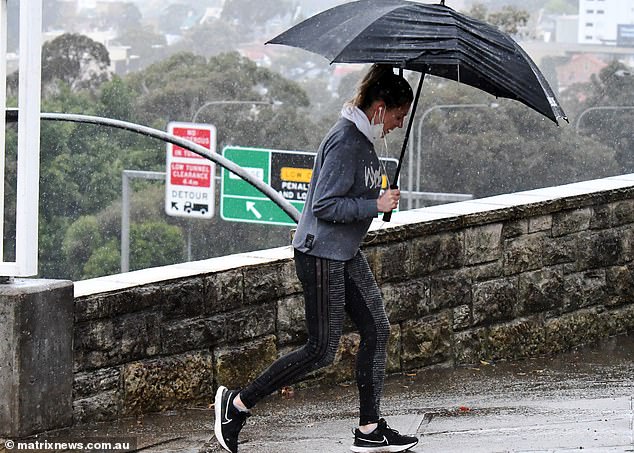 It looks set to a cooler, wetter summer on Australia’s east coast this year (pictured, a Sydneysider caught in a downpour)

Canberra will see some grim weather mid-week, with rain and temperatures getting as low as 5C on Wednesday and Friday, with heavy rain on Thursday, but the capital could see a sunny Sunday.

Melbourne will cop the worst weather in the major capitals this week, with a very high chance of rain until Saturday and wintry temperatures.

Friday looks the wettest day for the Victorian capital, with thunderstorms also possible but luckily Melbourne could also see some sunshine on Sunday.

Meanwhile in the west, Perth looks set for warm sunny weather from Thursday to Saturday. 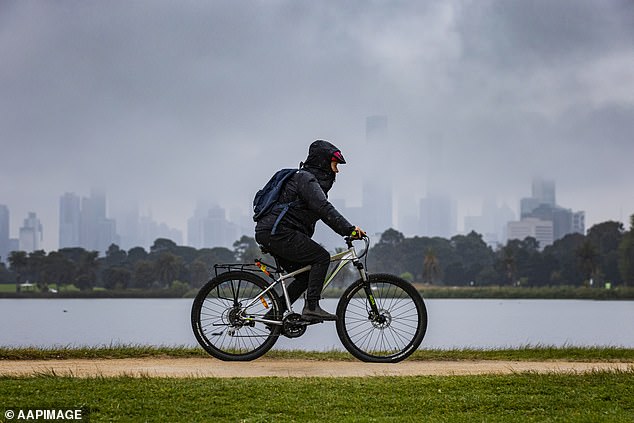 This is about as good as it’s going to get in Melbourne this week – with cold temperatures and rain forecast all week (pictured, a cyclist at Albert Park Lake in Melbourne)

FIVE DAY WEATHER IN YOUR CITY

The key weather modelling assessed by the BoM had led to the weather office declaring an unusual La Niña alert, with the likely patterns set to arrive within weeks.

‘Historically, when La Niña alert criteria have been met, La Niña has subsequently developed around 70 per cent of the time,’ the BoM announced.

‘A 70 per cent chance of an event is approximately triple the normal likelihood.’

It is however not expected to be a severe La Niña pattern and could even be weak to moderate. 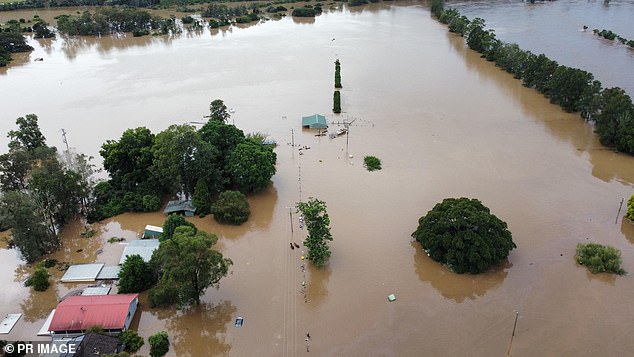 La Nina could mean an increased risk of flooding again for the east coast this summer (pictured, floods at Wingham, NSW in March 2021) 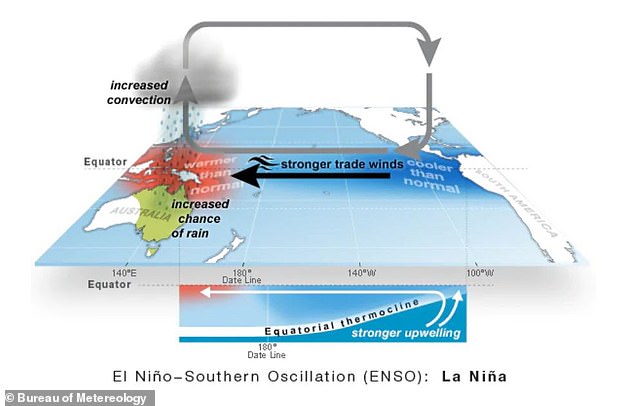 La Niña is caused by cooling of the ocean surface, or below-average sea surface temperatures, in the central and eastern tropical Pacific Ocean.

It leads to wetter weather from Indonesia down to Australia’s north and east coast.

As well as rainfall up to 20 per cent more rain than average for the eastern states, La Niña has many other features and impacts.

It also typically brings increased chances of flooding, cooler daytime temperatures and an increased risk of tropical cyclones in the eastern states and northern Australia. 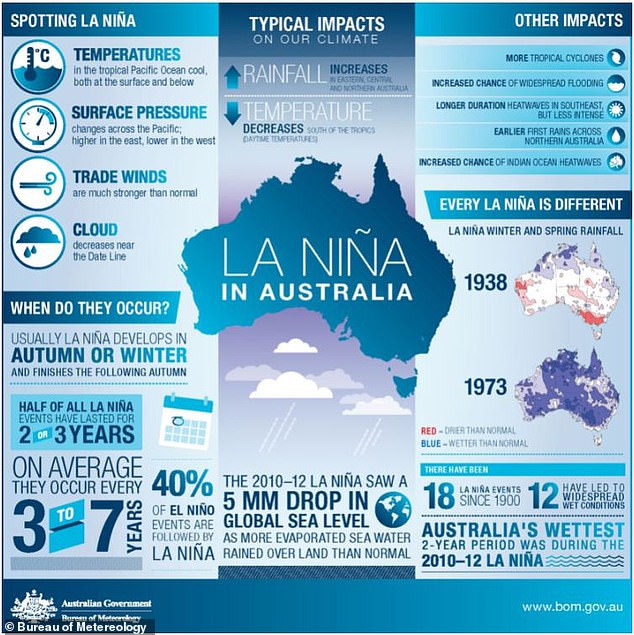 Positives from a La Niña season may be a reduced chance of catastrophic bushfires and some relief from the soaring temperatures Australia seems to increasingly endure.

Australia saw La Niña conditions from last summer into autumn, with December 2020 the third wettest since national records began in 1900.

What is La Niña? And how will it affect Australia

Increased chance of flooding: The east coast of Australia tends to be less affected by La Niña during the winter months but can experience severe flooding during La Niña summers.