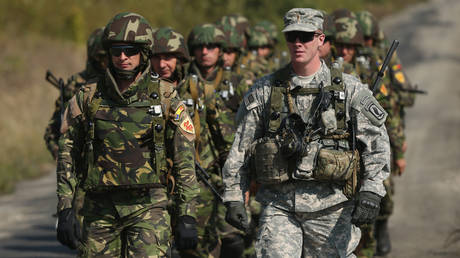 A senior Russian senator has advised Kiev and the West to consider how Moscow will react following revelations that strike missile systems could possibly appear in Ukraine, close to the Russian frontier.

Writing on his Telegram channel, Aleksey Pushkov suggested that Russia would have to take action in response.

“The appearance of missile strike systems in Ukraine will force Russia to react,” he wrote. “I believe that Kiev, Brussels, and Washington should take this warning very seriously.”

Pushkov was reacting to a comment made by Russian President Vladimir Putin at Tuesday’s “Russia Calling!” Investment Forum,  when he said that the appearance of advanced weaponry near the border is a serious issue.

“What should we do? We would then have to create something like this against those who threaten us in this way. And we can do it now,” Putin said, noting that Russia had now developed “hypersonic weapons.”

“Creating this kind of threat is a red line. But I hope it will not come to that. I hope that a sense of common sense and responsibility for our countries and the world community will prevail,” he concluded.

Putin’s remarks come as tensions are on the rise between Russia and Ukraine amid claims that Moscow is planning a military operation. The Kremlin has vehemently denied all accusations.