The widow of South Korea‘s last military dictator issued a brief apology over the ‘pains and scars’ caused by her husband’s brutal rule.

Dozens of relatives and former aides gathered at a Seoul hospital on Saturday to pay their final respects to Chun Doo-hwan who died age 90 on Tuesday.

Chun’s widow, Lee Soon-ja, offered a ‘deep apology’ for the ‘pains and scars’ on behalf of the family as the five-day funeral procession came to a close yesterday.

Without specifying Chun’s misdeeds, she said: ‘As we wrap up the funeral procession today, I would like to offer a deep apology on behalf of our family toward the people who suffered pains and scars during my husband’s time in office.’

Chun took power in a 1979 coup and violently crushed pro-democracy protests a year later, before being jailed for treason in the 1990s. 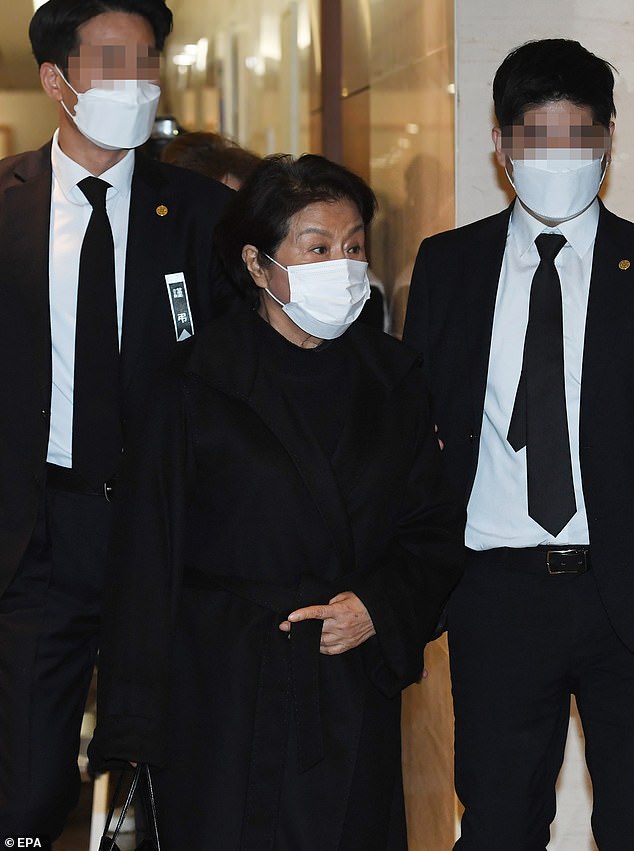 Chun’s family held a funeral service at Seoul’s Severance Hospital before taking his remains to a memorial park for cremation.

During the service at the hospital, widow Lee Soon-ja said that her husband had wished to be cremated and that his ashes be spread in border areas near North Korea.

Chun never apologized for his atrocities, which included overseeing a massacre of hundreds of pro-democracy protesters in the southern city of Gwangju in 1980.

This one of the darkest moments in the country’s modern history, which came as he attempted to solidify his rule following the coup. 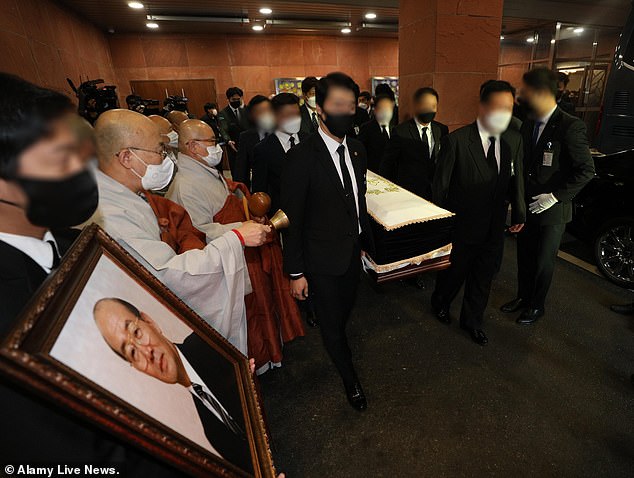 He called for Chun’s family to back her words with action, including cooperating with truth-finding efforts into Chun’s major wrongdoings.

‘I don’t think anyone will be consoled by Lee Soon-ja’s comments today,’ Cho told The Associated Press.

Chun was an army major general when he seized power in December 1979 with his military cronies, including Roh Tae-woo, who later succeeded Chun as president after winning the country’s first democratic election in decades. 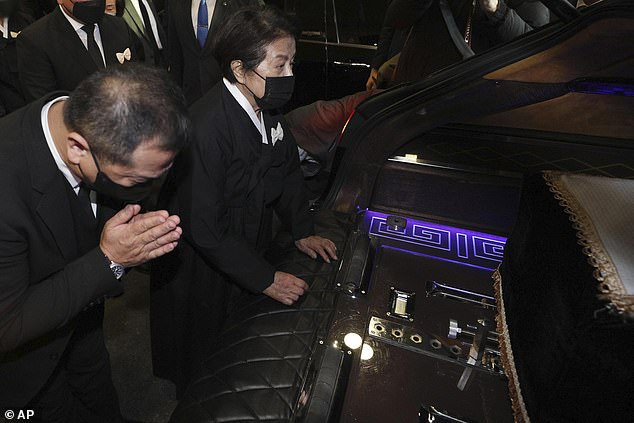 While Roh was given a state funeral, there has been much less sympathy for Chun, who had been nicknamed the ‘butcher of Gwangju’.

Although Roh never directly apologized over the crackdown, his son repeatedly visited a Gwangju cemetery to pay respects to the victims and apologized on behalf of his father, who was bed-ridden in the 10 years before his death.

Chun’s coup extended military-backed rule of the country following the assassination of his mentor and former army general, Park Chung-Hee, who had held power since 1961.

During their back-to-back dictatorships, South Koreans suffered huge human rights abuses although the national economy grew dramatically from the ruins of the 1950-53 Korean War. 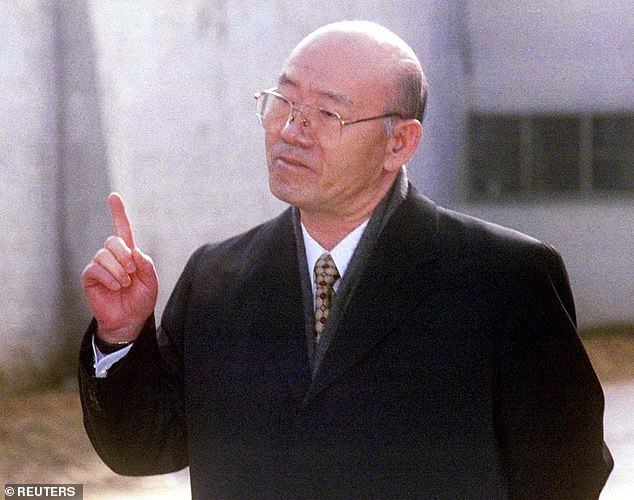 Chun’s family held a funeral service at Seoul’s Severance Hospital before taking his remains to a memorial park for cremation. Pictured in 1997

Aside from the bloody crackdown in Gwangju, Chun’s government also imprisoned tens of thousands of other dissidents during the 1980s, including future president and 2000 Nobel Peace Prize winner Kim Dae-jung.

Kim, then a prominent opposition leader, was initially sentenced to death by a military tribunal on accusations of fomenting the Gwangju uprising.

After the United States intervened, Kim’s sentence was reduced and he was eventually freed.

This process was accompanied by massive house clearings and roundups of vagrants and homeless people as officials tried to beautify the country for foreign visitors. 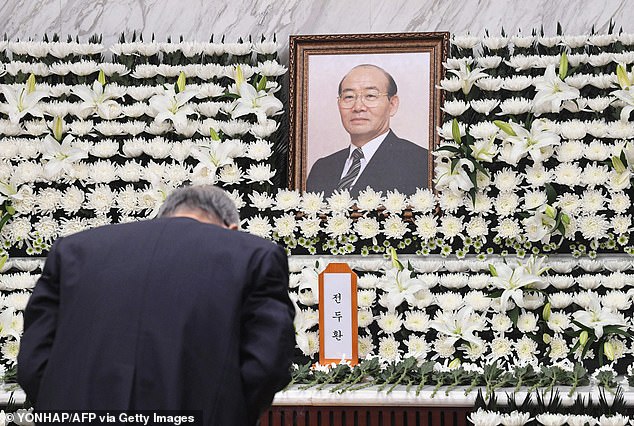 This created what is now the world’s largest diaspora of adoptees.

More than 60,000 children were sent abroad during Chun’s presidency, most of them newborns procured from stigmatized unwed mothers who were often pressured to relinquish their babies.

This was considered as the start of South Korea’s transition to democracy.

Roh, the governing party candidate, won a hotly contested December 1987 election, largely due to a splitting of the vote between liberal opposition candidates Kim Dae-jung and his chief rival, Kim Young-sam. 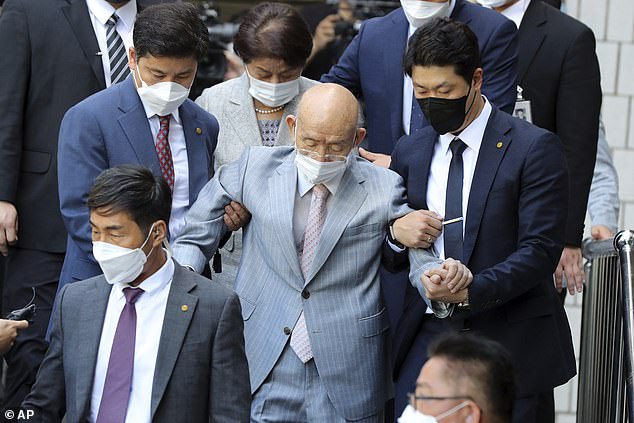 Chun pictured leaving a district court after attending an appellate trial on the charge of libel in Gwangju, South Korea, in August this year

After Roh left office in 1993, Kim Young-sam became president and had both Chun and Roh stand trial as part of a reform drive.

The two ex-presidents were convicted of mutiny and treason over the coup and the Gwangju crackdown, as well as corruption. Chun was sentenced to death and Roh to 22 1/2 years in prison.

The Supreme Court later reduced those sentences to life imprisonment for Chun and 17 years for Roh.

After spending about two years in prison, Roh and Chun were released in late 1997 under a special pardon requested by then President-elect Kim Dae-jung, who sought national reconciliation.