A ‘body finder’ who help discover the remains of murdered schoolboy Daniel Morcombe says the dig to find William Tyrrell’s remains is a ‘more complex’ job.

Speaking exclusively with Daily Mail Australia before going to a high-powered meeting with detectives at the Tyrrell search command post, water science expert Professor Jon Olley toured one of the possible burial sites now cordoned off by police tape on Wednesday morning.

Daily Mail Australia exclusively photographed both the site inspection and the professor’s briefing with police.

Along with two detectives and special task force police officers, the grim-faced professor joined forensic grave archaeologist, Dr Tony Lowe, to inspect an area which has been flattened and cleared by Rural Fire Service officers. 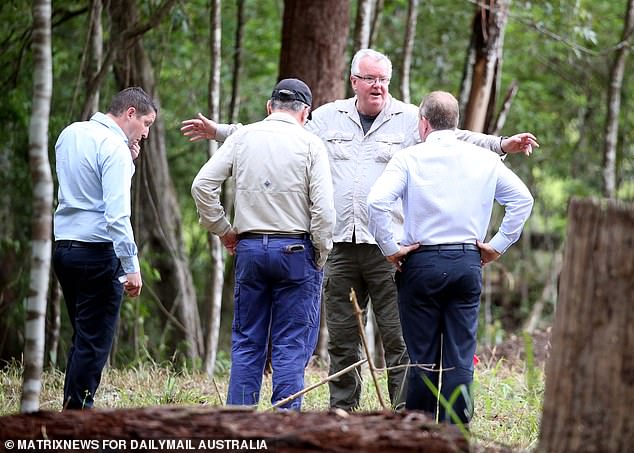 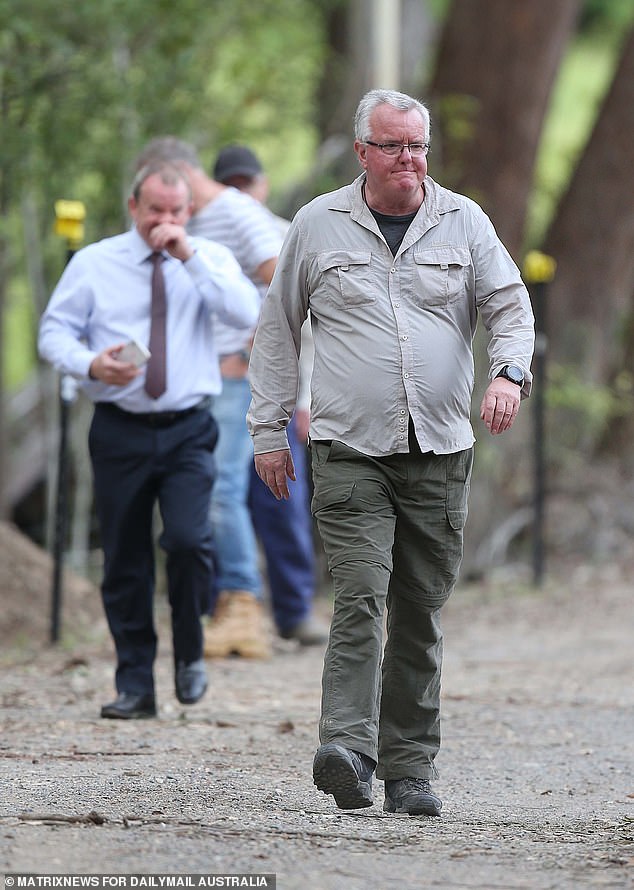 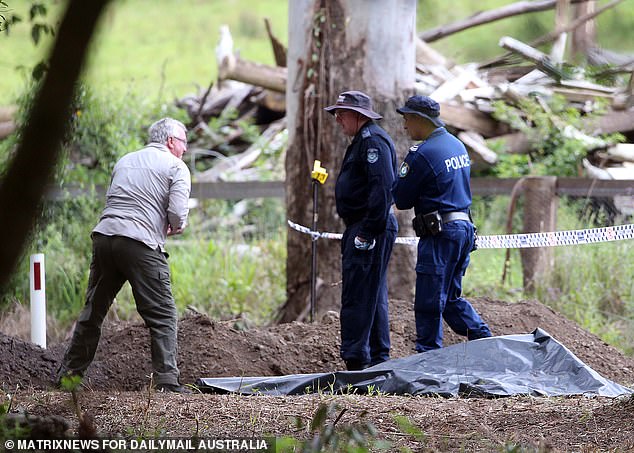 Along with police detectives and officers, Professor Olley joined forensic grave archaeologist, Dr Tony Lowe, to inspect an area which has been flattened and cleared by Rural Fire Service officers

The site, which has a mound of earth dug up by an excavator, is on a dirt road connected via a fire trail up through dense bush to the house where William vanished in 2014.

Professor Olley said the task of finding William’s remains was more difficult because it was over ‘a bigger area’.

In 2011, the Griffith University emeritus hydrology professor spent two months with a team of hydrologists and archaeologists searching on a steep swampy site near the Glasshouse Mountains on Queensland’s Sunshine Coast.

They found two shoes and three bones belonging to Daniel Morcombe, 13 years old at the time of his murder, whose body had been discarded by killer Brett Peter Cowan at the site in December 2003. 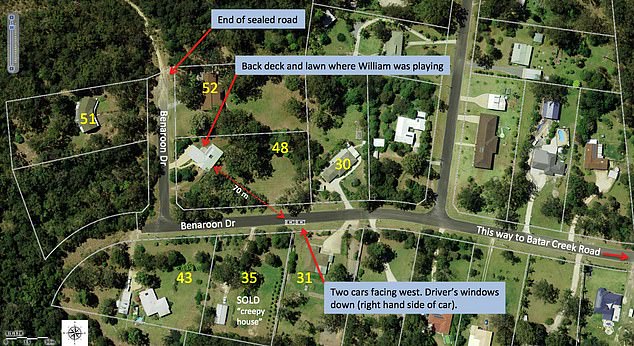 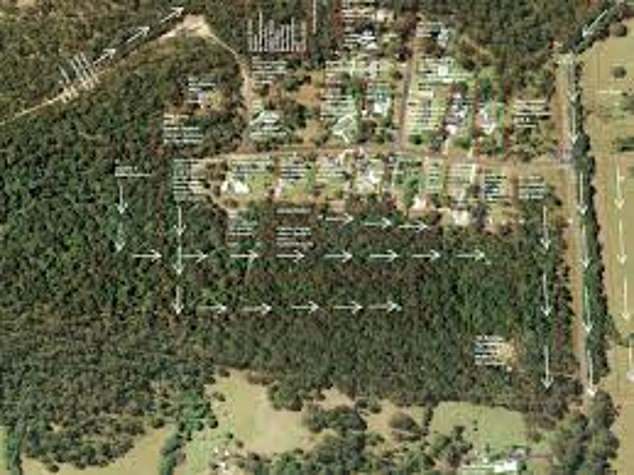 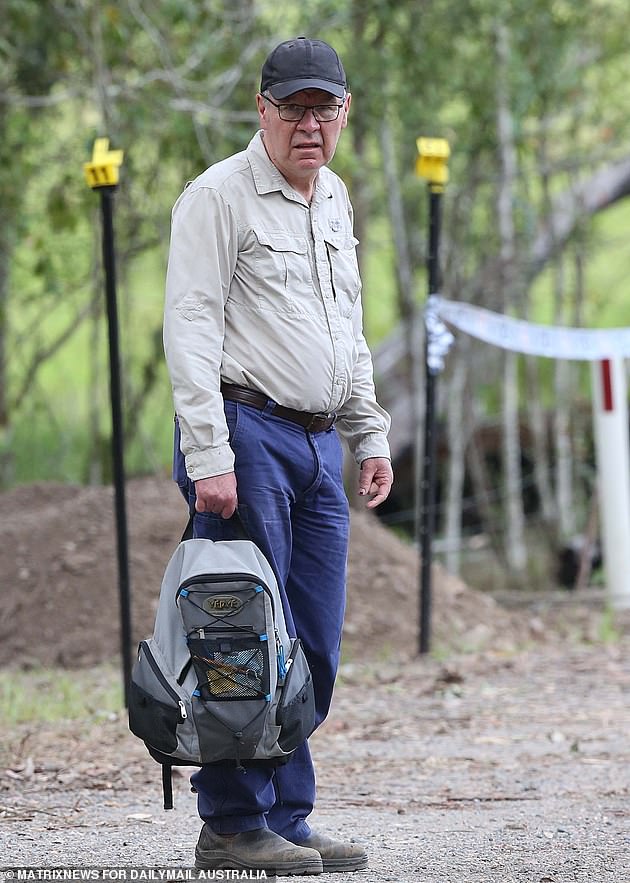 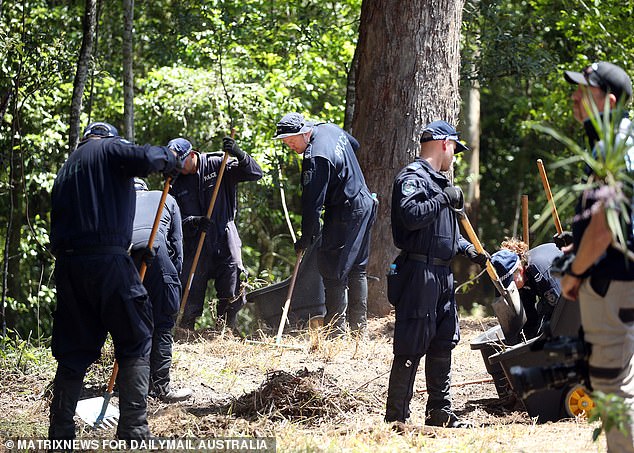 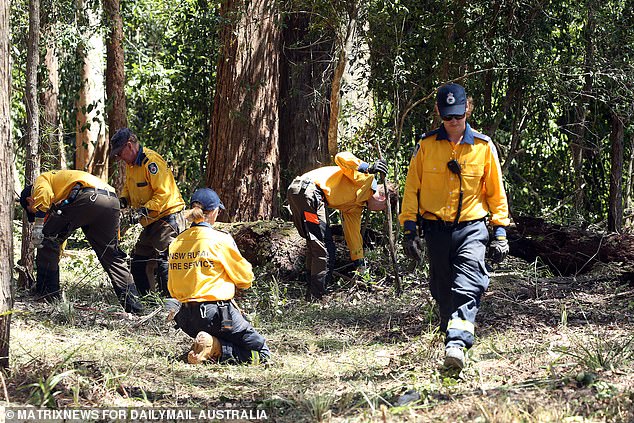 William Tyrrell vanished in September 2014, meaning the new search for his remains is taking place seven years after his suspected death.

In the Morcombe case, police excavated 500 cubic metres of sand to remove a layer of sediment up to a metre deep that had been deposited since Daniel’s body was left there. 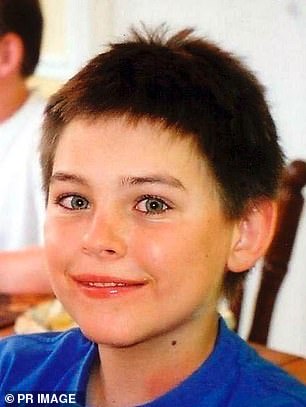 Police are looking for the toddler’s body.

William vanished about 10.30am on September 12, 2014, after playing games on the high verandah of the house owned by his foster grandmother, who had remarked the boy was too ‘hyperactive, boisterous’ that morning.

Police tore apart the garden of the house on Tuesday looking for possible traces of William, having fallen from the 5m high verandah onto a rock ledge or the grass below.

On Tuesday night, they inspected the deposits of Luminol they sprayed underneath the house for traces of blood.

The less than 1km of bushland between the Kendall street from which William disappeared and the three police dig sites has two large waterways.

One of the waterways runs behind the houses on the south side of the late foster grandmother’s street, across the road from her former house.

One area of bush surrounding the waterway was so dense that after William’s disappearance, it could not be properly searched. 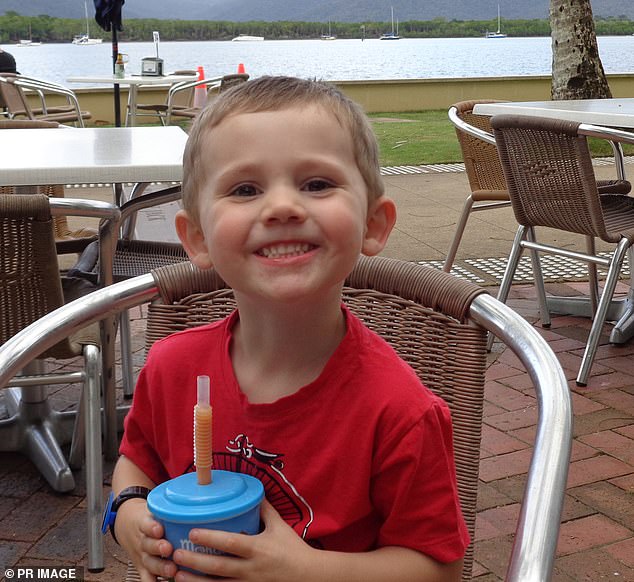 The three-bedroom house from where William vanished is on half-a-hectare adjoining a fire trail into the Kendall State Forest.

As described in the foster mother’s March 17, 2015 police statement tendered to the inquest into William’s disappearance, the block of land is located a short distance from where the actual road ends and becomes a state forest.

The foster mother’s detailed statement says the land slopes down backwards from the northern to southern boundaries and has a metre-high steel wire fence on the northeastern corner of the block.

William’s foster father told the inquest he had ridden his trail bike extensively around the Kendall State Forest near the foster grandmother’s house. 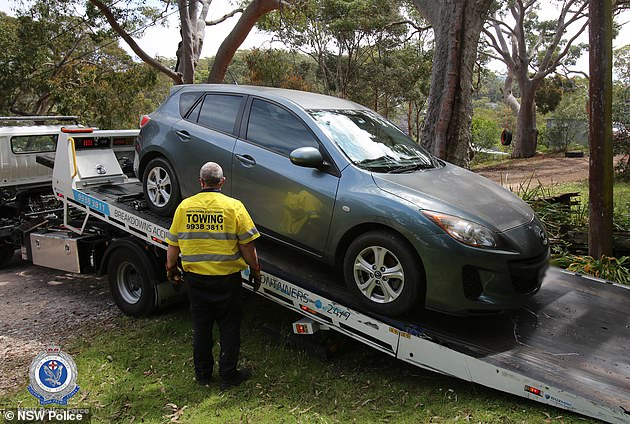 Police seized a car that belonged to William Tyrrell’s foster grandmother, a silver Mazda hatchback from a home at Gymea in Sydney’s south, under a coronial order a week ago

In other developments in the case, police have seized a car that belonged to William Tyrrell’s foster grandmother as the search for the missing boy’s body entered its third day.

Detectives from Strike Force Rosann seized a silver Mazda hatchback from a home at Gymea in Sydney’s south under a coronial order a week ago.

The vehicle was taken to a secure facility where it is undergoing extensive forensic examinations and analysis, which is expected to take several weeks.

William’s foster grandmother died aged 88 earlier this year and it’s understood the car was seized from a person unrelated to the investigation.