Premier League top-four finish would be a dream for Everton, says Ancelotti #Englishheadline

For years it troubled and perplexed Dr Ruth Tapsell that her type 2 diabetes patients made little or...
Read more


Breast cancer has become the most commonly diagnosed cancer type in the world, the World Health Organisation (WHO) has revealed on World Cancer Day.

According to the WHO’s International Agency for Research on Cancer (IARC), breast cancer in both sexes made up 11.7 per cent of all new cancer cases globally in 2020.

This figure compared with 11.4 per cent for lung cancer, 10 per cent for colorectal cancer, 7.3 per cent prostate cancer and 5.6 per cent stomach cancer.

In 2020, 2.3 million cases of breast cancer in women alone were diagnosed worldwide, while about 685,000 deaths occurred from breast cancer. 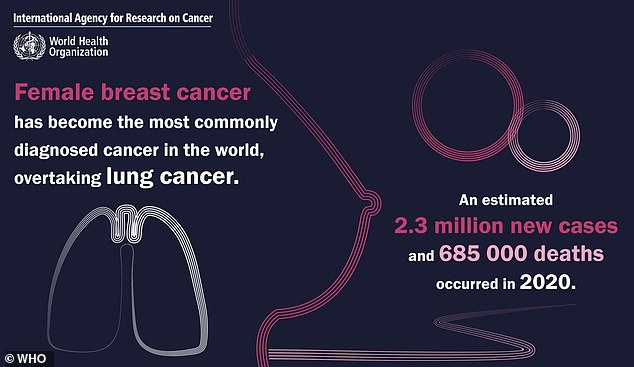 ‘This new international data is a timely reminder that breast cancer has not been paused by Covid-19, and continues to have a devastating impact on people’s lives in the UK, and around the world,’ said Dr Simon Vincent, director of research, support and influencing at the charity Breast Cancer Now.

Taking into account all forms of cancer, WHO said the global cancer burden increased in 2020, totalling 19.3 million new cases and 10 million deaths for the year.

Around the world, one in five people develop cancer during their lifetime, and one in eight men and one in 11 women die from the disease. 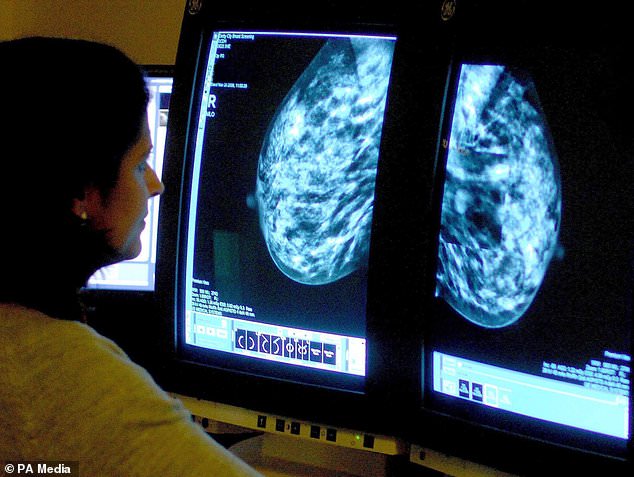 Breast cancer is the most common cancer in the world. The highest incidence rates of breast cancer (new cases per population) occurred in women in highincome countries

– Lump in the underarm area

– Swelling in part or all of the breast

People are being urged to seek help for potential symptoms of cancer after it emerged that fewer are coming forward during the pandemic.

Surgery to remove tumours plummeted by one third during the first wave of coronavirus, it was revealed this week.

From April to August some 21,700 fewer patients had cancer surgery than in the same period of 2019, according to Public Health England (PHE).

Cancer diagnosed at an earlier stage is more likely to be successfully treated.

‘In the UK, breast cancer was dealt a huge blow with the first wave of the pandemic having major impacts across treatment and care,’ said Dr Vincent. 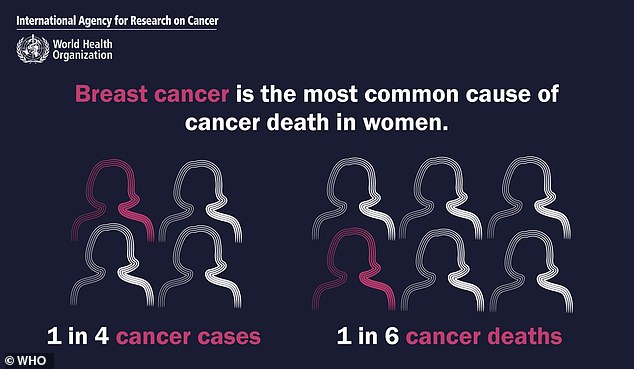 ‘Now, the already strained NHS is facing immense pressures due to a significant rise in Covid-19 cases and hospital admissions.

‘It’s now vital that the government provides significant long-term investment in the breast cancer workforce – in particular in imaging and diagnostics – to give all women the best chance of survival.

‘Despite the pandemic, we must continue to look to the future and invest in research so that we can discover new ways to prevent breast cancer, save lives and help people live well with this devastating disease.’

Despite the concerning new figures, breast cancer generally has a ‘very good prognosis’ with a timely diagnosis and appropriate treatment, according to WHO.

‘The number of women who are alive today and who were diagnosed with breast cancer within the past five years is estimated to be almost 8 million, higher than the number of cancer survivors for any other cancer type,’ WHO said in a statement.

‘However, breast cancer survival is not uniformly high around the world.’

The highest incidence rates of breast cancer occurred in women in high-income countries, such as those in North America, where there were approximately 90 new cases per 100,000 women, it added.

Incidence rates were substantially lower, but are increasing, in many low- and middle-income countries.

‘There are substantial disparities in survival between more-developed and less-developed countries, as well as between different social groups within countries,’ WHO said.

‘These disparities are due in part to reduced access to early diagnosis and timely completion of treatment.’

An individual’s lifestyle can increase or decrease their risk of developing breast cancer.

Lifestyles typical of industrialised countries – like postponement of childbearing and having fewer children, greater levels of excess body weight and physical inactivity – increase the risk of developing breast cancer, according to WHO.

Cancer risks being the ‘forgotten C’ during Covid pandemic, Prince Charles warns as he raises fears over cancelled treatments and missed diagnoses 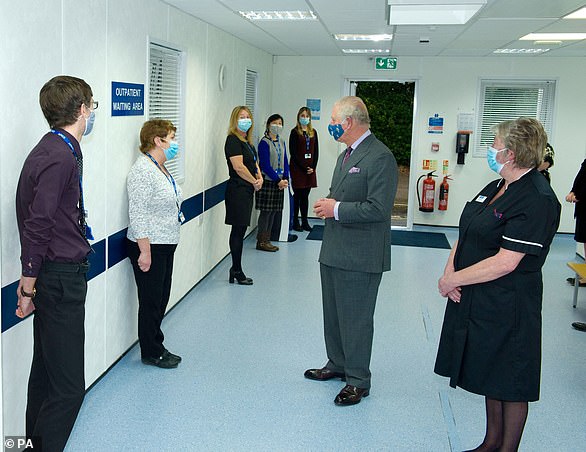 The Prince of Wales, pictured at Tetbury Hospital in December 2020, said delayed operations over the last year are causing ‘despair’

Prince Charles has warned that cancer risks becoming ‘the Forgotten C’ during the Covid pandemic.

The Prince of Wales said the delayed operations over the last year are causing ‘despair’.

In a piece for the Daily Telegraph in January 2021, Charles, patron of Macmillan Cancer Support, said the charity has lost a third of its fundraised income.

He wrote: ‘In many cases, due to the pandemic, difficulties have become crises, a sense of isolation has become actual separation, and – as vital treatment or surgery has been postponed – anxiety has become despair.

‘Macmillan has been adapting to this ever-evolving situation to ensure that cancer does not become ‘the Forgotten C’ during the pandemic.’

Macmillan estimates up to 50,000 people could be living with undiagnosed cancer because of delays to NHS services.

In England alone, between March and August 2020, around 30,000 fewer people had started their first cancer treatment compared to the year before, it added.

Experts predict the number of patients with undiagnosed cases of the disease could double by this time next year – unless cancer services are protected.

They estimate it will take the NHS at least 20 months to tackle the backlog caused by coronavirus so far.

NHS England said the grim forecast does not factor in the work of health staff in recent weeks to bring ‘cancer treatments back to pre-pandemic levels’.

According to a Health Service Journal story in December 2020, waiting lists for cancer patients almost doubled over the past seven months, based on internal NHS data not made public.

A July 2020 study from the London School of Hygiene and Tropical Medicine predicts that delays in diagnosis that began during lockdown for four cancers – breast, colorectal, lung and oesophageal – will lead to 3,500 avoidable deaths by 2025.

When it comes to urological cancers – which include prostate, bladder, penile and kidney – urgent referrals have dropped by half in England (49.5 per cent).

This compared with the same April to July period last year, according to Prostate Cancer UK.

An April 2020 published by University College London found that several hospitals in England and Northern Ireland reported an average 60 per cent drop in patients attending chemotherapy appointments for all types of cancer.

Premier League top-four finish would be a dream for Everton, says Ancelotti #Englishheadline

For years it troubled and perplexed Dr Ruth Tapsell that her type 2 diabetes patients made little or no progress despite the drugs...
Read more

How did it take TWO YEARS to diagnose my brain disorder? Janey was told it was ‘all in the mind’. #Englishheadline

I have itchy, red eyes and small red bumps on the edges of my eyelid and inside. The optometrist diagnosed blepharitis and a...
Read more

A diamond-tipped probe that fixes faulty heart rhythms could cut the risk of stroke.The probe, which is slightly narrower than a straw, has...
Read more