A popular YouTuber hailed a hero earlier this week for rushing to the aid of a man being choked to death during a road rage incident has sparked chaos at an ‘Invasion Day’ rally before being arrested.

Luke Erwin, 26, was slammed online for what he claimed was a good deed by handing out free cases of beer to the indigenous  in Brisbane on Australia Day.

Mr Erwin claims in the footage posted to his YouTube channel that he was arrested by police a short time later following claims he was giving out the beer to minors, which he strongly denied.

A fight between several men broke out while he was handing out the booze at the rally, which sparked anger from some attendees. 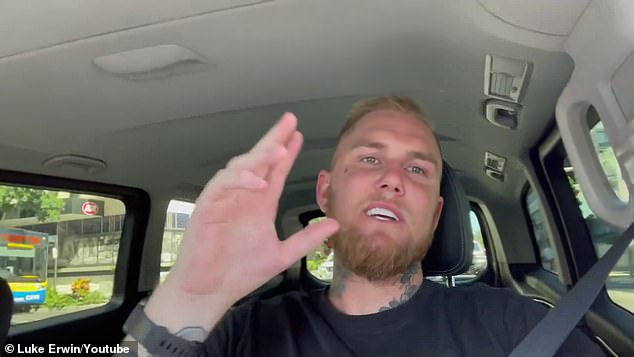 Luke Erwin (pictured on Tuesday) has come under heavy fire for his latest YouTube video.

A day earlier, Mr Erwin was being hailed a hero for bravely came to the defence of a man from being choked to death during a shocking display of road rage in Coomera on the Gold Coast on Monday.

But his latest video posted on Tuesday prompted the opposite response. It began with Mr Erwin explaining his plans as he stocks up on cases at a bottle shop.

He turns up at an ‘Invasion Day’ rally in a local park where some attendees gladly accept the offer of free alcohol stashed in Mr Erwin’s car boot.

But it then turns to chaos as the footage zooms in of two men trading blows just metres away as a large crowd of onlookers, including children watch on.

One of the attendees then turns on Mr Erwin, who is ordered to leave.

‘You need to go,’ an indigenous woman tells him as she pulls down the boot of his car.

‘I’m just giving back to the people,’ Mr Erwin tried to explain, before leaving.

He’s then filmed driving away, telling attendees to meet him down the road if they want free beer. 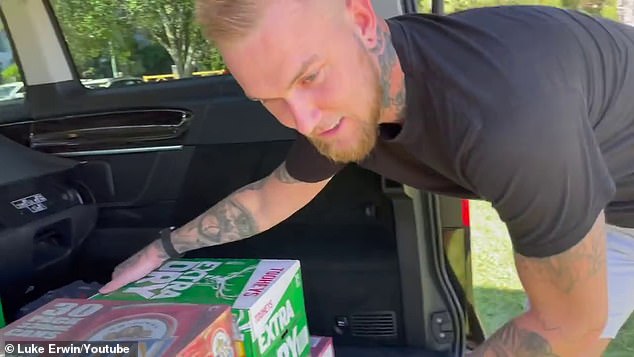 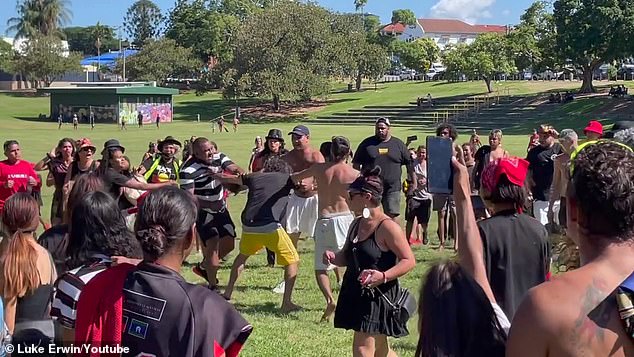 He pulls over and begins handing out more free booze before he’s questioned by officers driving past.

The officer replies: ‘It’s all good man. Just make sure whoever you’re giving it to is legal age.’

‘Some of the people at the park have just alleged you’re giving alcohol to people under 18,’ an officer tells him.

‘Is this an organised thing or is this something you decided to do off your own back?’

Mr Erwin tells police the fight at the park broke out before he arrived and denies the claims he gave alcohol to minors.

He later claims in the videos he was arrested before released.

‘Hopefully all good comes out of that and we try and do a good thing,’ he ends the seven minute clip. 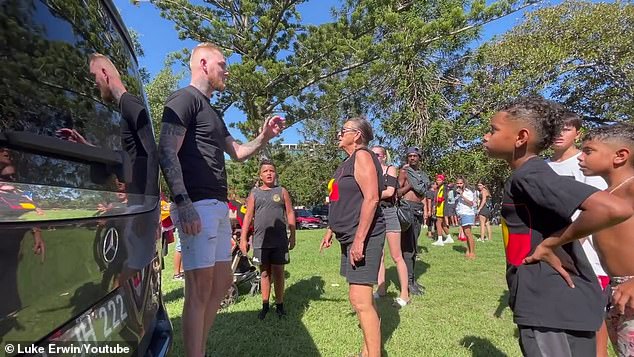 Luke Erwin (left)  is soon confronted by an angry attendee (right), who orders him to leave the rally held in a local park

Online viewers were divided by the footage, which have since garnered 23,000 YouTube views and a further 20,000 on Instagram.

While some hailed Mr Erwin as a legend, others were outraged and slammed his actions as ‘f**king shameful’.

‘A lot of communities are dry communities, alcohol is a major concern and health problem for a lot of their communities,’ one woman wrote online.

Another added:  ‘You had good intentions… but could’ve handed out water, food and essentials to mob that would’ve been a smarter decision.

‘Also capturing the fight and giving away alcohol is just adding to our stereotypes and stigmas that we are trying to break down and challenge.’ 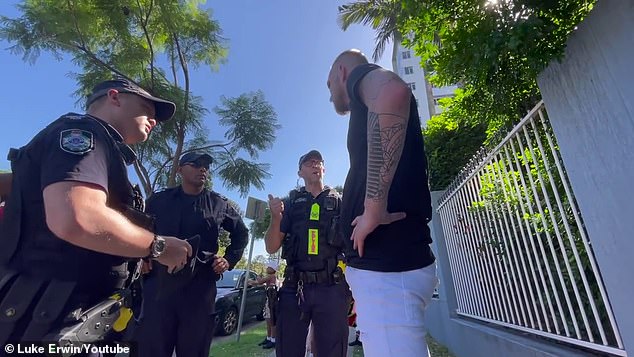 Luke Erwin (left) was confronted and arrested by police a short time later, who claimed they were responding to reports from people in the park that he was giving out alcohol to minors, which he strenuously denied

Other furious viewers accused Mr Erwin of posting the footage to attract more likes and followers on social media and trying to make himself look good for fans.

‘You never did this “out of the goodness of your heart or trying to give back to the community” you did this because you give zero f**ks about indigenous communities or their people. You done this for views,’ one commented.

Another added: ‘You have a huge platform – using it to highlight to our First Nations peoples voices. I don’t see any constructive activism in this video what so ever.’

Queensland Police declined to comment on the incident or whether potential charges may be laid, citing privacy reasons.

Booze and Indigenous Australians have a problematic relationship as many remote communities are afflicted with alcohol abuse. 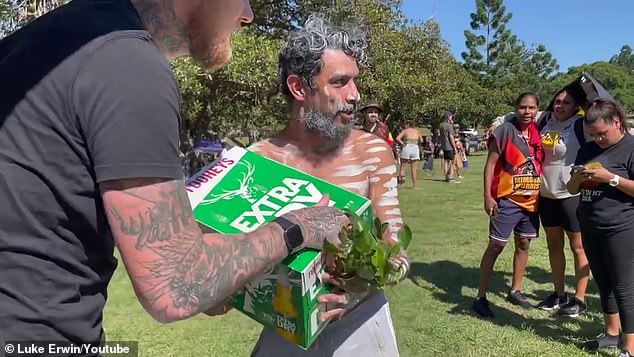 ‘Please help, get off him’: Brave moment YouTuber jumps in to try and break up brutal two-on-one street fight which almost saw a tradie choked to death

A YouTube star has bravely jumped in to save a man from being choked to death during a shocking display of road rage.

Comedian Luke Erwin, 26, captured disturbing footage of the bloody fight in Coomera, on the Gold Coast, on Monday afternoon and shared it on Instagram.

‘We had to intervene, these guys were out of control, the dude could have lost his life.’ 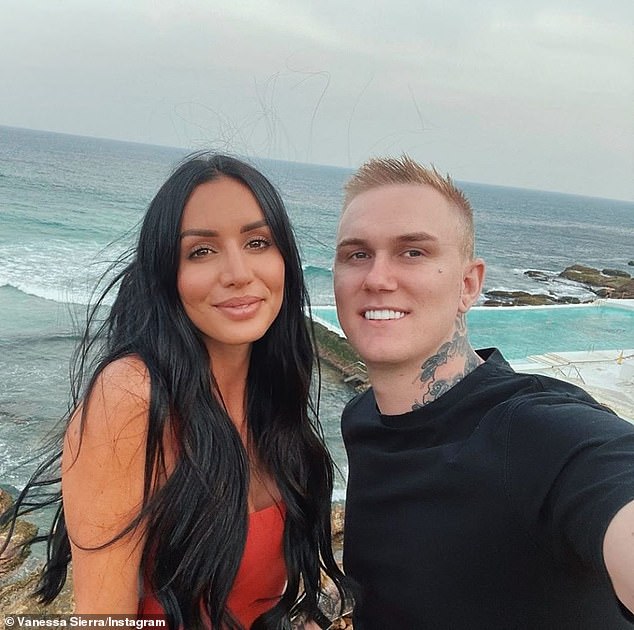 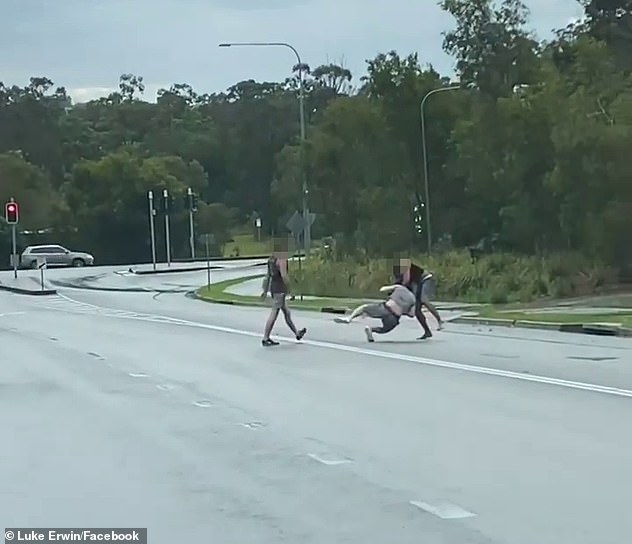 Pictured: The three men brawling in the middle of a wet road on Queensland’s Gold Coast

The confronting situation unfolded when the three men abandoned their cars at a set of traffic light and started throwing punches in the middle of the wet road.

While Erwin and two friends could be heard laughing from inside their vehicle at the beginning of the video, the tone took a turn when they realised someone’s life was in danger.

‘Should be break it up, or na?’ someone from behind the camera asked.

Seconds later, the video showed Erwin running over to save a blood-soaked father Filiti from being throttled to death.

‘Stay back, c***,’ Erwin shouted at the first shirtless attacker, as his friend tried to prise the second attacker’s elbow off the 32-year-old’s neck. 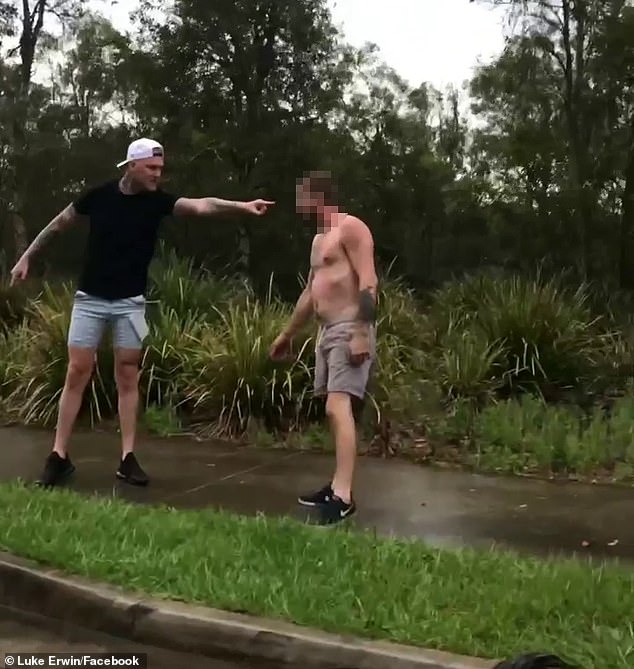 ‘Stay back, c***,’ 26-year-old Erwin shouted at the first shirtless attacker, as the situation unfolded (pictured) 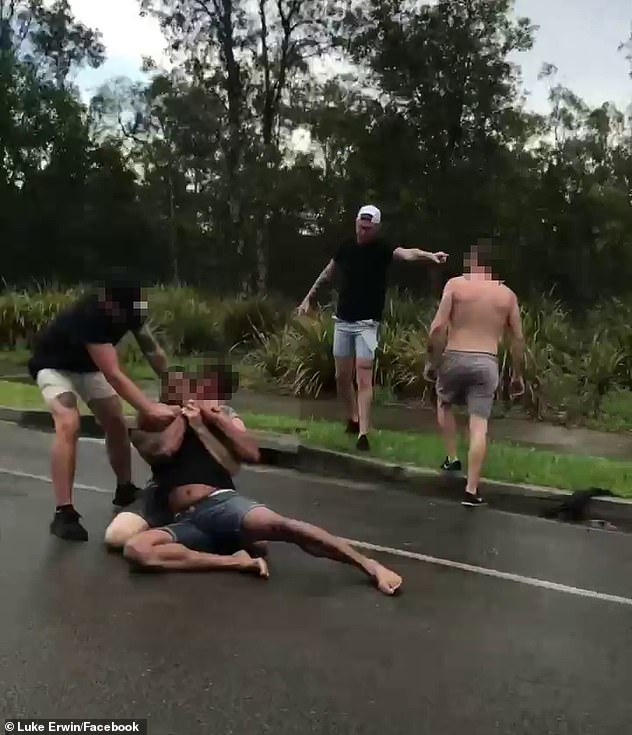 Pictured: Erwin trying to fend off a second attacker, as his friend tried to save Filiti’s life

Young children could be heard screaming in the background and car horns were beeping as onlookers yelled for the fight to end.

Voice trembling, the cameraman approached the man who had his victim in a chokehold and said: ‘Stop, stop. Help him, please help him.’

‘Look you motherf***er, get off him c***,’ Erwin shouted, desperately trying to stop the attacker from killing his victim by pulling at his leg.

Erwin and his friends managed to tear the pair apart, before the attacker climbed on top of Filiti and started strangling him with his hands. 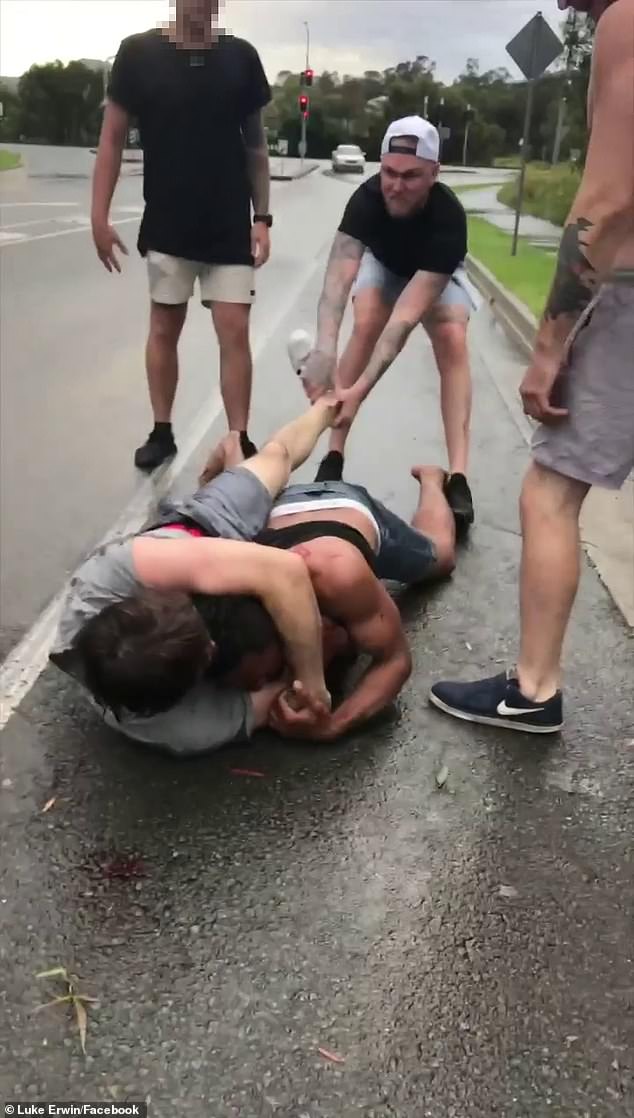 ‘Look you motherf***er, get off him c***,’ Erwin shouted, desperately trying to stop the attacker from killing his victim by pulling at his leg (pictured) 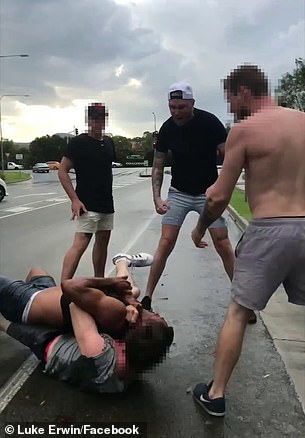 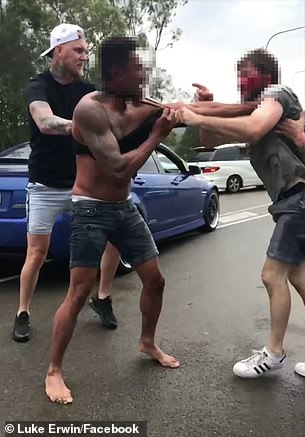 The fray stopped when a car pulled up and the two bloodied attackers stood up and got back into their car.

Filiti replied to Erwin’s video on Instagram: ‘I owe you a beer, brother.’

The father-of-three told Daily Mail Australia the fight started because he beeped at the pair when they nearly hit his car on the highway.

‘They abused me and wanted me to pull over. I should have just kept driving but I didn’t,’ he said.

When asked if he thought his attacker would kill him, the electrician replied: ‘Yeah he wasn’t stopping I’m glad Luke was there other wise I think he’d probably try to kill me.’

Despite the melee, Filiti waled away with just a cut on the nose.

A man who claimed to have been part of the brawl replied to the video on Instagram.

Police in Queensland said the incident was not reported.